What a weekend – on Friday afternoon I travelled down to Wittersham in Kent to deliver the eulogy at my old friend, Donald Sinden’s funeral.  Of course it was packed out. Sir Patrick Stewart read a lesson, and Dame Judi Dench’s rendering of Prospero’s speech from The Tempest, reminded everyone why she is so universally respected as one of the leading actresses in her lifetime.

‘Our revels now are ended. These our actors, as I foretold you, were all spirits, and are melted into air, into thin air; And, like the baseless fabric of this vision, the cloud-capped towers, the gorgeous palaces, the solemn temples, the great globe itself, yea, all which it inherit, shall dissolve; And, like this insubstantial pageant faded, leave not a rack behind. We are such stuff as dreams are made on, and our little life is rounded with a sleep.’

I drove back to London to conduct the auction at the Asian Achievers Awards dinner at Grosvenor House. The prizes were presented by the Foreign Secretary, Philip Hammond, and the auction raised £100k for the Cherie Blair Foundation for Women.

On Saturday I got up early to drive down to Weston-super-Mare to meet the crew of the RNLI lifeboat and to help their fundraising appeal, of which I am president.  Their appeal target is £300k in three years, and they’ve already raised £232k in 12months – bravo, not only to the excellent crew but to George Papworth and his indefatigable committee!   I then drove to Cambridge, arriving home just in time for dinner with the six Dames who were taking part in the Chariots of Fire Race the next day in aid of the Arthur Rank Hospice.  The following morning, Professor Dame Carol Black ran the fastest time, beating my wife Mary by 11 seconds.  It was later announced at the prize giving ceremony that they had ‘won the Dames section’ – possibly helped by their brilliant coach, Dame Edna Everage, sending advice from Melbourne: “I love Danish pastries and these girls are just as scrumptious. Speaking as their personal trainer and nutritionist I am with them every sprint of the way. After all, I knitted their knickers.”

I forgot to tell you that I was woken at 1.45am by my son James to tell me that he and Gwyneth have a 6lb 3oz boy – my second grandchild. I repeat, what a weekend. 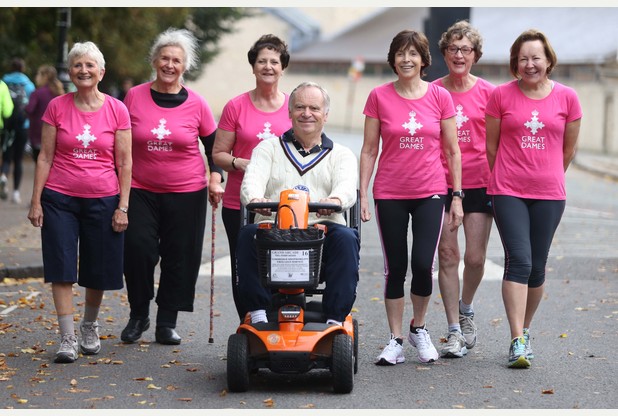 Photo of the Great Dames courtesy of Cambridge News